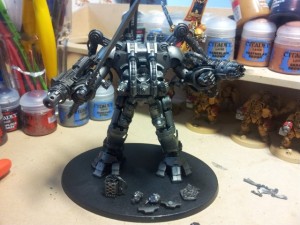 Just a quick update showing the progress of the Nemesis Dreadknight that I’ve been working on.
Had a chance to spend a bit more time on it yesterday and it’s now been basecoated, so I will need to update this with a  more recent pic later.

In the first pic though, it is mostly assembled (Missing the pilot head as I’m painting that separately) and ready for the basecoat.
You might note that it has a silvery tint to it already… This is a coat that was already applied to it when I got it from my friend. I would have worked with this already, but it is a bit uneven and has a sticky quality to it, making my fingerprints show up after I’m holding it (Quite irritating).

I’ve also gone back to basic and removed some (Not all) of the mould lines, as well as some of the sprue remnants with a hobby knife. This took some time as there is a lot of parts to this model.
I’m planning to basecoat it with Army Painter Plate Mail Metal and work up from there. I’ve used Army Painter before, namely for my Imperial Fists, but never used the Plate Mail Metal. I’ve read that it’s like the old Mithril Silver Citadel paint, but I’m going to see…

This entry was posted in Warhammer 40k.