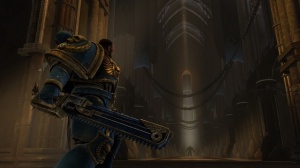 Oh yes!
An amazing day is upon us. The video game Warhammer 40k: Space Marine, currently under development by Relic Entertainment and to be published by THQ, is finally been stamped with a release date! August 2011.

I’m seriously excited about the release of this game and have been checking for updates of release for some time now.

Warhammer 40,000: Space Marine is going to be a 3rd person, Gears-of-War-esque experience, but that is as far as the comparison goes. The game itself is set in the future-gothic setting of Warhammer 40k and maintains the gritty, dark feel of the Dawn of War game series also developed by Relic Entertainment. As per usual, Relic have pured all their care and attention into this game and I’m very sure its going to pay off, given their history of producing quality Warhammer 40k games like the Dawn of War series of games.

For some more detail on Relic and some details on Warhammer 40k video games, check my older article about Dark Millenium Online.

The main plot of the game involves you assuming control of a Space Marine Captain of the Ultramarines chapter, and decending upon a Forge World used to manufacture Titans (Giant 100ft killing machines capable of levelling entire cities at a time) and defending it from a massive invasion of Space Orks.

Seeing as Space Orks are my favorite army in Warhammer 40k, I’m looking forward to seeing them represented well in this game. There is also the promise of the forces of Chaos presenting themselves and most likely orchestrating their own plans against the Imperium.

This game promises a very visceral gaming experience and I am to understand that there is no cover system employed, which I find both very fitting to Space Marines and the Warhammer 40k universe.

This entry was posted in Warhammer 40k.