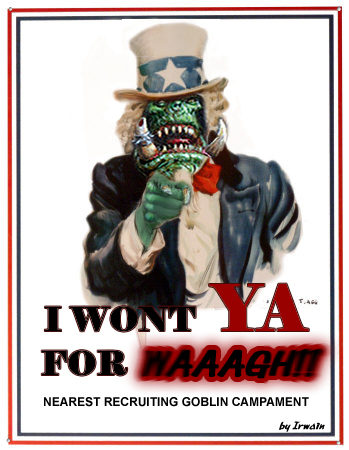 Well as I’ve mentioned before, I’m a Warhammer 40k player, and I wouldn’t claim to be a particularly great one at that… But I do it for the fun of it… And because I love my army: Orks! Space Orks to be exact.

Orks are a great army to play in 40k, not least because they have so much character as a race, but also because they’re great for stompin’ those pesky ‘umies!
I built my Orkish horde relatively quickly through a couple of purchases from eBay (SHOCK! HORROR! I BOUGHT models!) and a donation of old-skool Orks from a very old and good friend of mine who used to collect Orks many many years ago when I was first dipping my toes into the 40k hobby.
Back then I played for about a year, never really got the hang of the rules, didn’t really know anyone who played and eventually gave up because it turned out to be quite a solitary endeavour for me. Still, it always stayed with me and since then I would always wander into any Games Workshop store that was within eyeshot to umm and arr about collecting again. As a substitute, I got heavily into reading the wide range of 40k novels released by the Black Library, which I readily recommend.

It wasn’t until quite recently I took the plunge and actually went for it (again), purchasing the Assault on Black Reach starter set, a bunch of paints and started, encouraged by my friends who play 40k.

Since then I’ve played a handful of games, bought a few units from eBay with what I believe is a good reason: 40k can be REALLY expensive and time consuming! I worked the numbers and determined that it would be cheaper and faster if I purchased some badly painted models that I could finish/repaint, it would both speed up my army building by giving me something to immediately play with (I don’t like playing with unpainted models) and saving some cash as opposed to buying everything new.

I have bought about half of my army new, assembled and painted them myself but I do think it would have taken a long time to get to where I am now. Considering that, I wasn’t afraid that I’d lose interest… More that I wanted to PLAY sooner rather than later. I’ll get there eventually, and even now I have about 20 boyz, 20-odd nobz, 3 warbikes, 3 deffkoptas and a trukk that I have yet to assemble and/or paint. I have a lot more that I’ve painted myself and some others that I’ve bought and finished.

So, there it is, my Orks and how I got into it.
I’ll be adding photos soon of some of my units.

This entry was posted in Ramblings, Warhammer 40k.